Is Euthanasia Required After A Dog Bite In California?

Dog bite incidents are taken seriously in the state of California. Dogs have powerful jaws, and they can inflict severe injuries on victims. California has various laws that revolve around what happens after a dog bite. These laws include strict liability applied to the dog’s owner when it comes to paying compensation for injuries as well as euthanasia laws following a bite incident. Here, we want to discuss what California law says about euthanasia of a dog following a bite. 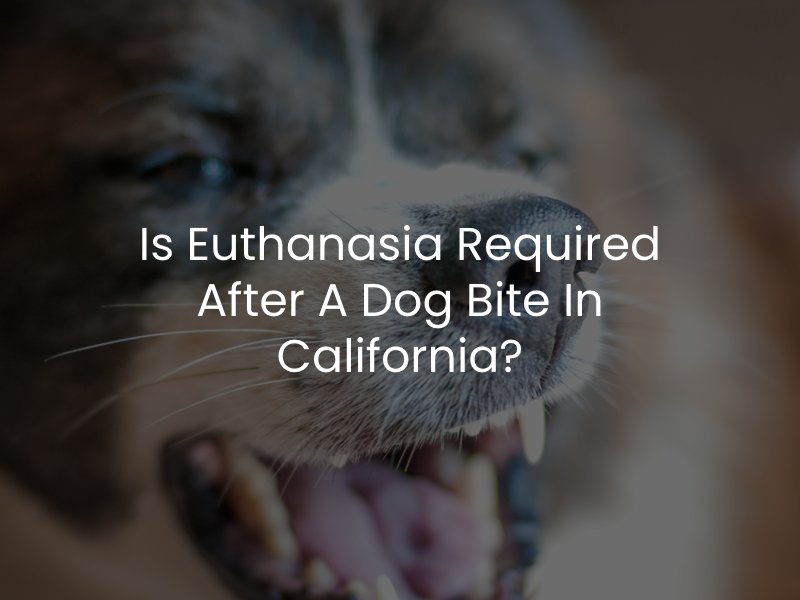 When are Dogs Allowed to be Euthanized After a Bite in California?

California law allows for a dog to be euthanized after a bite incident in three circumstances. This includes the following:

It is important to point out that these euthanasia laws pertain only to circumstances where a dog bites a person. Euthanasia will not be an option if a dog is accused of biting another dog.

If a dog is found to have rabies after it has bitten somebody, it will be euthanized. There is no hearing required before a dog in this scenario is put down. Anytime a dog bites somebody in California, local health department officials will be notified. This triggers a 10-day quarantine process that will take place at a shelter, a vet’s office, or at the owner’s home (only if the dog has a low risk of having rabies).

If a dog shows symptoms of rabies during the quarantine period and a veterinarian confirms the rabies, the dog will be euthanized.

Dogs That Have Bitten at Least Two People

If a dog now has at least two biting incidents on its record due to the most recent dog bite, it can be euthanized after a court hearing. It is important to point out that these bites must have happened in two separate incidents, even if the dog bites more than one person in a single incident. Additionally, bites do not count towards the two-bite limit if the victim was a trespasser or if the dog was a police or military dog working at the time the incident occurred.

Attack Dogs With One Serious Bite

If it is found that a dog was raised to fight or trained as an attack dog, it can be euthanized after a single bite if the incident caused serious injuries. A hearing will be required in these situations as well.

If you or somebody you care about has been bitten and injured by a dog, you need to seek assistance from a dog bite attorney as soon as possible. These cases can become challenging, particularly when you have to deal with seeking medical care, recovering from your injury, and providing proof of the incident.

Regardless of whether or not the dog in question may be euthanized, there is no doubting that a dog bite victim needs compensation for their injuries and other losses. This could include coverage of their medical bills, loss income, household out-of-pocket expenses, pain and suffering damages, and more.