The Worst Drivers in Sacramento

From Drunk Driving to Blocked Driveways: An Analysis of Driving Related Crimes in Sacramento

A 2019 study ranked Sacramento as the fifth-worst city in America when it came to its drivers, but are we really that bad here? If so, where?

In 2020, the Sacramento Police Department received 6,168 calls in driver-related crimes, including hit-and-run accidents, drunk driving, reckless driving, and driveway blocking. Out of those:

Which neighborhoods in Sacramento ranked the highest in these driver-related crimes? We dug into the data to find out.

Out of the hit and runs reported, a little over a fourth (473) resulted in injuries. The majority (62 percent) of the reports were misdemeanor hit and run report referrals – used for statistical purposes, general tracking, and providing information to city traffic engineers.

Valley Hi/North Laguna had the most hit and run reports (164) of Sacramento – making up 38 percent of all calls in that area. Interestingly, neighborhoods that are known for overall higher rates of crime in Sacramento also had high reports of hit and run accidents: South Hagginwood (55), Midtown (45), Old North Sacramento (60), Gardenland (42), and Downtown Sacramento (38), to name a few. Yet, South Natomas (88), one of the safest neighborhoods in Sacramento, ranked as number 3 and made up 43 percent of calls in that area.

Where Are Drunk Drivers Reported Most Often in Sacramento?

When it comes to drunk driving, we’d expect a higher number of reports in Downtown Sacramento or other areas with bars, nightlife, and more reckless abandon. But while Downtown Sacramento ranked in the top ten, to our surprise, it didn’t turn out to be the neighborhood with the most drunk driver reports. 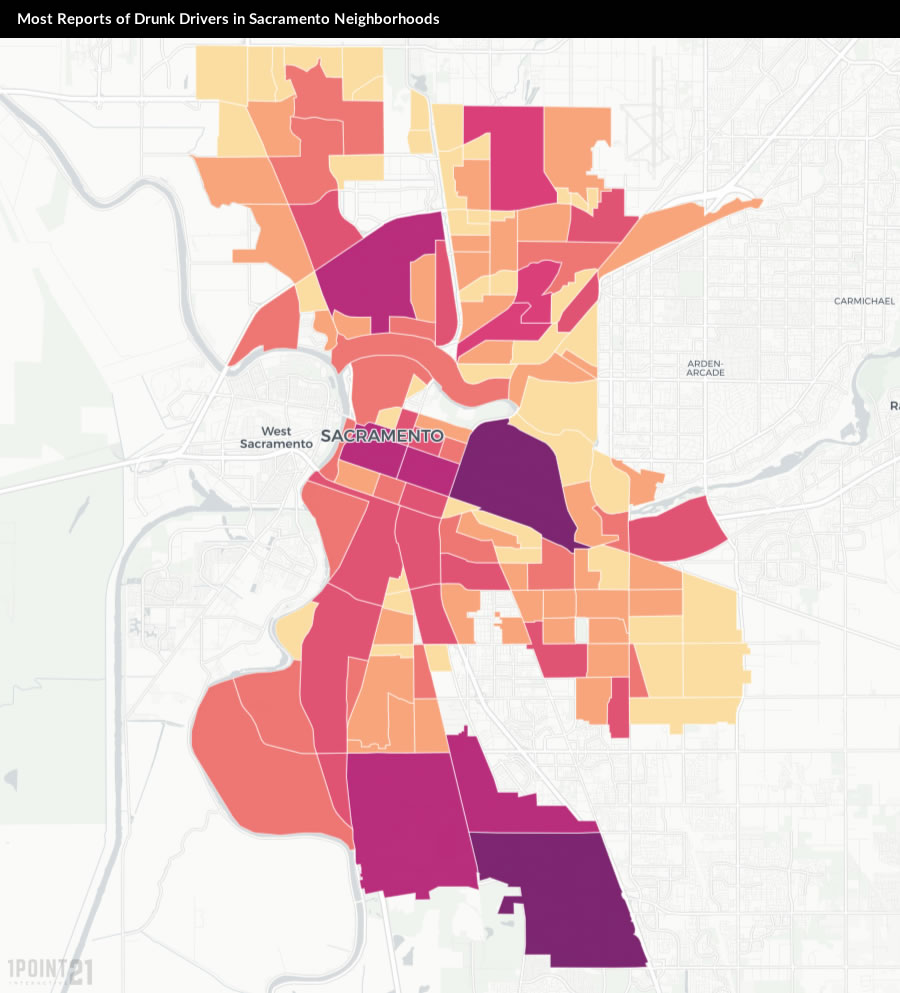 The Sacramento Police Department received 793 reports of drunk driving in 2020, a little over 10 percent of all driver-related crimes. Valley Hi/North Laguna, which already ranked number one in hit and run reports, also turned out to have the most drunk driving reports (45) of all the Sacramento neighborhoods. East Sacramento (36) and Midtown (30), both known for their late-night scenes, came in next. Downtown Sacramento had 29 drunk driving incidents reported, making up 24 percent of all calls in the neighborhood. Surprisingly, South Natomas (31) – known for its safe environment, parks, and green spaces – ranked number four.

Reckless driving made up 42 percent of all driver-related-crimes in Sacramento – or 2,601 reports. In California, reckless driving is legally defined as driving “in willful or wanton disregard for the safety of persons or property.” Reckless driving, such as driving 15 mph over the speed limit or neglecting traffic lights, brings a dangerous element to an already unpredictable environment. Most of the time, it’s hard to miss.

In 2020, Sacramento Police received the most reckless driving reports from Meadowview (238), making up 60 percent of all calls in that neighborhood. It isn’t surprising that Valley Hi/North Laguna – the neighborhood with the highest hit and run and drunk driving reports – also turned up with a significant number of reckless driving reports (190). Old Sacramento (90) – popular with the college crowd and tourists – made up 84 percent of all calls in that area, while the generally safe Natomas Crossing (43) made up 58 percent. It also turns out that the people of South Natomas (62) and Pocket (34) – two of the safest neighborhoods in Sacramento – ranked in the top 25 and are a lot less cautious when it comes to their driving.

Have you ever found yourself rushing to your car, only to find that you have no way out of your driveway? Someone is blocking your driveway with his or her vehicle – completely disregarding your property and the law. We understand what a pain that can be, and wanted to find out where it happened the most.  In Sacramento, 935 people called the police to report this in 2020. 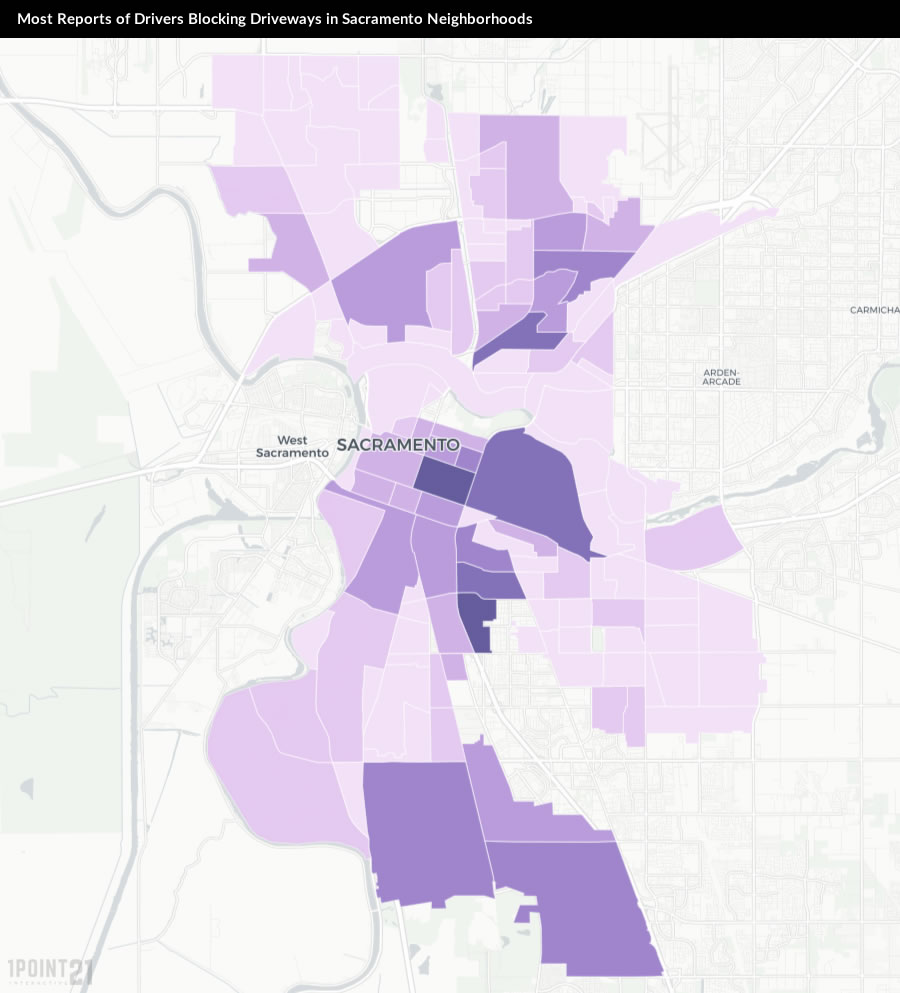 It turns out that of the 935 total blocked driveway reports, Midtown ranked number 1. The people of Midtown – the historical district, east of downtown – called the police 65 times last year for blocked driveways, making up 41 percent of all calls in that area. South Oak Park (54) and Old North Sacramento (51) weren’t far behind. All three neighborhoods share thriving restaurant industries – likely inviting crowds of people at once. Valley Hi/North Laguna (28) ranks in the top ten, for this crime as well. South City Farms had 15 calls on the issue but made up 75 percent of all calls in that neighborhood.

Blocked Driveways in Sacramento by Neighborhood

Driving in Sacramento’s busiest areas can be taxing, but remember to obey the rules of the road and to consider other drivers’ safety. This data shows that our choices on the road impact others every day, in small and significant ways. While driving, focus on controlling what you can control:

This data includes all calls for service received by the Sacramento Police Department in 2020, related to driving behavior. If you are interested in republishing the data, interactive elements, or images included above, please provide credit by linking to this page.