According to a recent year studied by the National Highway Traffic Safety Administration (NHTSA), 47% of victims in motor vehicle fatalities in the United States were not wearing seatbelts at the time of the crash. The NHTSA estimates that seatbelts save thousands of people each year, which is why just about every jurisdiction across the nation has seatbelt laws. California is no exception. You can find the seatbelt law in the Motor Vehicle Code § 27315. 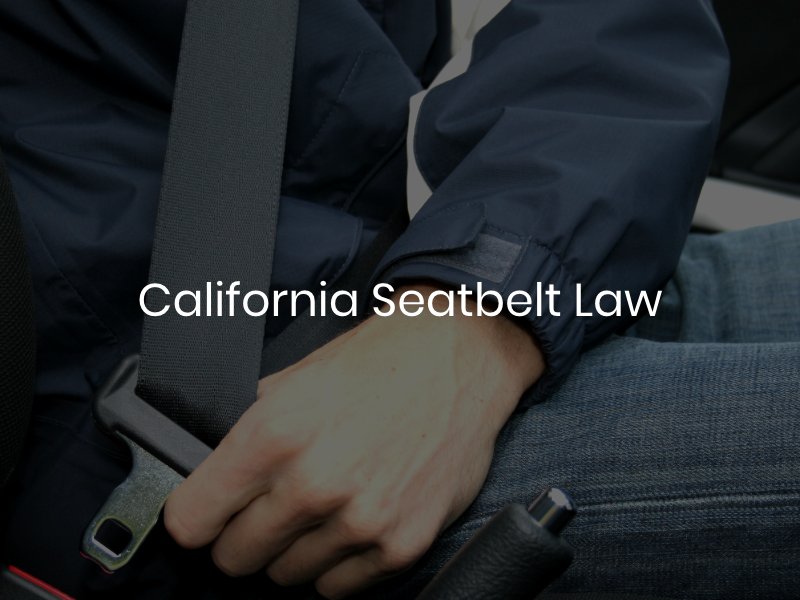 Who Must Wear a Seatbelt in California?

Under the California seatbelt law, no one is allowed to operate a vehicle on the roadway unless the driver and every passenger aged 16 or over is wearing a seatbelt. This includes passengers in the front seat as well as the back seat.

What Type of Seatbelt Must be Worn in California?

At a minimum, the law states that the seatbelt must be a lap belt that crosses a person’s upper thighs and hips. If there is an upper portion to the seatbelt in the vehicle, then it should cross the chest. It is important to use seatbelts properly. You should never place the shoulder built behind the back or under your arm.

Do Children Have to Wear Seatbelts in California?

What if a Disability Prevents Me from Wearing a Seatbelt?

If anybody has a disability that prevents them from wearing a seatbelt, they must have a letter from their doctor indicating as such. A person with a disability may be exempt from the seatbelt law.

What are the Penalties for Not Wearing a Seatbelt in California?

There are various penalties for violations of the California seatbelt law.

However, while those may be the fines prescribed by law, the California Office of Traffic Safety says that seatbelt violations typically start at $162. If a person is cited for not properly restraining a child in a vehicle, the fine can be as much as $465. In many cases, there will be additional court fees added on top of the seatbelt fine total. If a person is unable to pay all of their fees related to a seatbelt violation, they could lose their driver’s license in the state of California.

Contributory Negligence and not Wearing a Seatbelt

If you were not wearing your seatbelt at the time of an accident, you may wonder whether or not you are allowed to bring a personal injury lawsuit against someone who caused your crash. California law specifically states that a failure to wear a seatbelt does not mean that somebody cannot bring a personal injury lawsuit. However, the injured person’s failure to wear a seatbelt could be a factor in the allocation of fault between the parties involved.

It will be up to a jury to decide whether or not the victim’s injuries could have been prevented or would have been less severe had they been wearing a seatbelt. If a jury determines that certain injuries would not have occurred if the seatbelt had been worn, a person may receive a reduced settlement.