When you are operating a vehicle on the roadways of California, it is vital that your be in good operating condition. We have all seen vehicles on the roadway that probably should not be there due to various safety violations. Maybe the exhaust is dangling precariously close to the roadway. Perhaps a person is driving with absolutely bald tires. Many people may not consider the importance of mirrors in the vehicle, but you can be sure California law covers this topic. Mirrors provide safety, and if you are driving your vehicle anywhere in California, you need to know if you are operating legally. 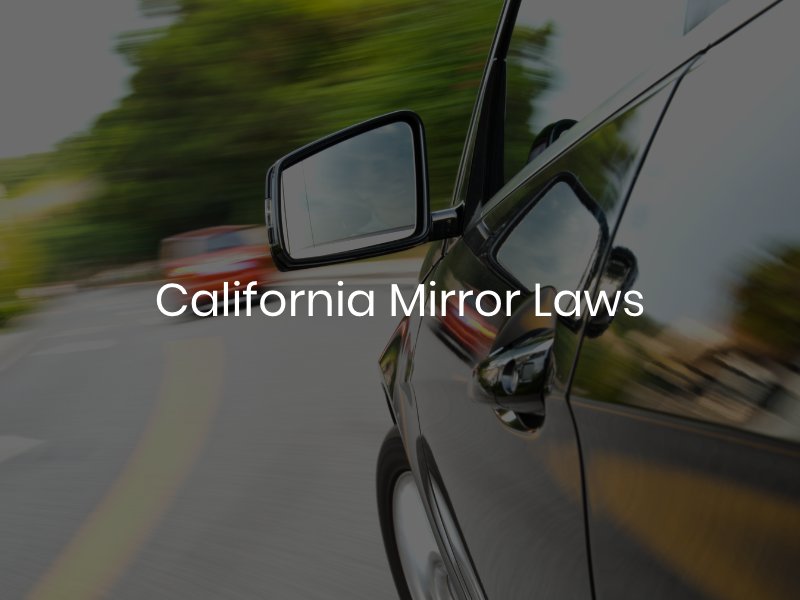 Number and Location of Rearview Mirrors

Under the California Vehicle Code, every vehicle registered in the state (except for motorcycles) is required to have at least two rearview mirrors. One of these mirrors must be on the vehicle’s left-hand side (driver’s side). The other mirror can be located anywhere so long as the driver has a clear view of the highway at least 200 feet behind their vehicle in both mirrors.

Vehicles that are registered out-of-state and motorcycles must have at least one rearview mirror that allows the driver to see 200 feet behind them on the roadway.

What About Vehicles with Restricted Views?

This provision will also apply if a person has a vehicle loaded in a way that blocks their view to the rear. However, passengers inside the vehicle do not count as an obstruction even if they do impede the driver’s view.

Can You Have Objects on your Rearview Mirror?

California law stipulates that it is unlawful to operate a vehicle with any object placed or installed on the vehicle that reduces their view through the windshield or side mirrors. Drivers are allowed to have objects dangling from rearview mirrors, so long as the object does not impede the driver’s clear view of the roadway.

What are the Penalties for a Mirror Violation in California?

Will you be at Fault for an Accident if you do not Have Proper Mirrors?

California operates under a comparative negligence law that recognizes more than one party can be at fault for an accident. For example, if a driver without the required mirrors on their vehicle makes a legal lane change after checking the other lane and their blind spots, but ends up striking a vehicle that was traveling at an excessive rate of speed who should never have been beside them, both parties could still be at fault for the incident.

Typically, a driver operating at a recklessly high speed would be at fault for an incident, but it could be argued that the driver without proper mirrors would have had a better chance at seeing the approaching speeding vehicle had they been following the mirror requirements. In situations like this, a jury may decide to reduce the total damages paid out to victims in the case based on their percentage of fault. Consider speaking with a qualified car accident attorney in Sacramento following a car collision to explore your legal options.